Employment in Houston has surged over the first four months of the year, according to the payroll employment data released by the Texas Workforce Commission (TWC). Seasonally-adjusted data show 38,700 new jobs through April, or if the pace continued through the year 116,100 new jobs. If such a year materialized, it would compare to the monster addition of 115,000 new jobs in Houston’s metropolitan area in 2012, before 2013 saw job growth slow to 76,000.

The current data show a sharp reversal of trends that led to the 2013 slowdown, especially a dramatic turn-around in jobs tied to oil- and gas-related drilling. This raises several questions. First, are the data to be trusted? After all, TWC payroll figures are estimates based on a relatively thin sample and substantial statistical modeling; they will be subject to repeated revision in the months to come. Can we, for example, confirm the pick-up in growth in other data series? Second, if it is real, what is driving it? And finally, is it a temporary bump or likely to continue through the year or even beyond? The answers we offer below are that it is real; it is a mix of temporary and more persistent events; and that it provides an improved outlook for Houston in 2014 and 2015. Based on these results, we have raised our forecast for 2014 to 86,000 new jobs, an increase of 21,000. 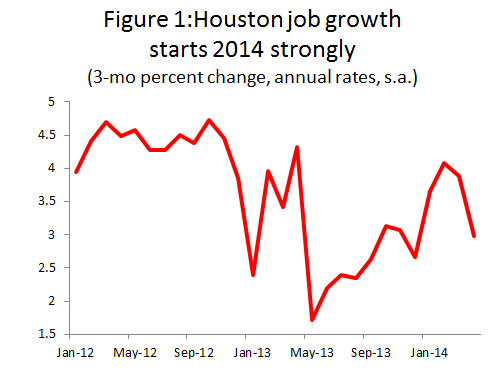 Figure 1 shows payroll job growth in Houston running at 4.5 percent annual rates through 2012, slowing to below 2.0 percent by the spring of 2013, and pulling back up to 4.5 percent in early 2014. Preliminary data show job growth slowing to 3.0 percent by April, but the cumulative total of 38,700 jobs added through April is much bigger than had been expected. 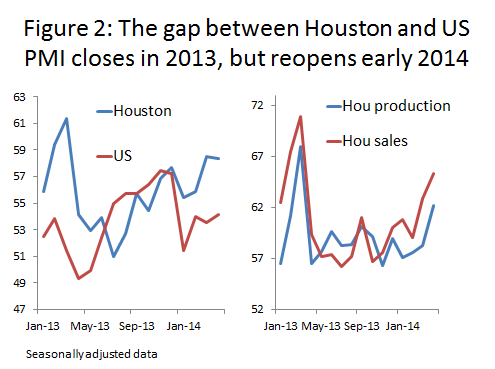 There are other data series that support the proposition that Houston’s economic growth accelerated early this year. The Houston Chapter of the Institute for Supply Management conducts a monthly survey of local purchasing managers that results in a purchasing managers’ index (PMI) similar to the manufacturing index released by the national organization on the first business day of each month. The PMI is set so that 50 is neutral, above 50 indicates expansion, and below 50 implies contraction. Following the end of the 2010 recession, Houston’s PMI was consistently reported as being 5-10 percentage points higher than the national index, largely reflecting the ability of oil- and natural gas-related activity to move Houston onto a stronger growth path. Last year, with oil and gas exploration pulling back in the wake of a collapse in natural gas prices, the Houston and national indexes moved to comparable levels, as seen in the left side of Figure 2. However, in early 2014, Houston again separates itself from the U.S. index. The PMI is comprised of seven individual series, including responses to questions about sales, production, lead times, and other factors. The right side of Figure 2 shows that, according to this data, sales and production led the early-year acceleration of local economic activity. 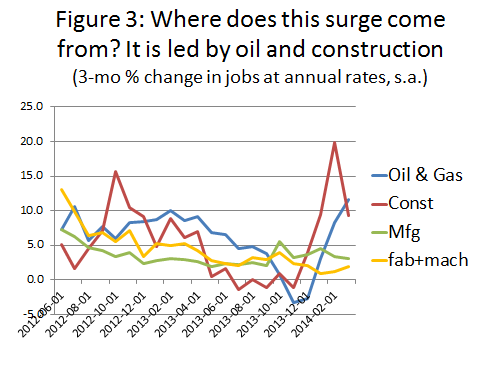 Figures on unemployment also indicate an acceleration of local growth. Unlike the payroll employment data, which is based on a survey of local firms, unemployment figures are compiled from a telephone survey of households, and provide another check on recent economic strength. Since the end of the recession in late 2009, the number of unemployed workers in Houston has been reduced by about one-third. Progress in reducing the number of unemployed slowed through 2013, and then accelerated in 2014. By April, the local unemployment rate fell to seasonally-adjusted 4.9 percent from 5.7 percent in December, to reach its lowest point since July 2008.

Where Does It Come From?

Given three independent sources of data that confirm an early-year growth spurt, we can have some confidence that it won’t all be revised away. The most likely suspects for causing such acceleration in Houston are always the goods-producing sectors – oil and natural gas, construction, and manufacturing. Figure 3 shows that oil- and gas-related employment had been running at 10 percent annual rates in late 2012, but had slowed to a mild contraction by late 2013. It then suddenly surges back to double-digit rates in recent months. Similarly, construction employment had stopped growing by mid-2013, only to surge back to double-digit growth early this year. Manufacturing remains flat, however, as did the manufacturing sectors most closely related to oil and gas exploration – fabricated metal and machinery.

A chart very similar to Figure 3 can be produced by just replacing the Houston data with that for the state of Texas. It shows statewide oil- and gas-related jobs spiking up to a 15 percent growth rate, and construction to near 6 percent. Weekly hours in Texas oil and gas have quickly risen from 42 to 47 hours. Houston is sharing (or perhaps leading) similar trends seen across the state.

Unfortunately, the data do not come with neat explanations attached, leaving us to speculate about what is happening here. Let’s start with oil and gas, and two likely possibilities.

In addition, natural gas futures prices remain above $4.50 through next spring, as prices are expected to remain high until we can re-establish normal inventories of natural gas. In the spring of 2014, natural gas inventories had been pulled down by the harsh winter to only 45 percent of normal. These continued high prices offer producers the opportunity to sell their production forward for additional revenues.

Bonus money delivered by the polar vortex is apparently being spent by natural gas producers – mostly on oil-directed drilling in the Permian Basin. While other land-based drilling in Texas remains flat, the Permian Basin’s rig count has surged from 450 to 550 working rigs since November. The Permian Basin is the greatest of U.S. oil fields, and this finally marks its transition to horizontal drilling from vertical drilling. It is rich in opportunities for horizontal drilling and fracturing, but has until now the basin has been so rich in other opportunities, opened up by high oil prices and technology, that it has been too busy to turn to shale plays. As always, much of the capital, the high level executive oversight, the engineering, and the equipment will come out of Houston.

This is a one-time, weather-related event, but with stimulus that should carry through 2014 and into early 2015. It could bring to Houston an unanticipated bonus of several thousand jobs.

The only clear fact that emerges from the recent data on construction is that about 40 percent of the increase is related to heavy construction for utilities, roads, lot development, and other infrastructure. Probably backward looking, this is a continued effort to catch up with the rapid growth that has shaped the local economy for more than a decade.

The rest of the construction growth in 2014 is general building construction – single-family residential, multi-family, retail, office, light industrial, and heavy industrial. Out of this group, most can also be categorized as backward-looking, catch-up activities in response to past growth. The exception is heavy construction on the east side of Houston, new petrochemical and liquefied natural gas (LNG) export facilities, some of which are now entering the construction phase.

Horizontal drilling and hydraulic fracturing of shale in the U.S. has produced an abundance of cheap natural gas and natural gas liquids. The liquids are produced along with the methane gas stream – butane, propane, ethane, and natural gasoline – and are used to produce intermediate products (petrochemicals) that ultimately become plastic or synthetic rubber. For example, ethane is used to make the chemical ethylene, the largest building block on the Ship Channel, which ultimately becomes polyethylene or polyvinyl chloride (PVC) plastic.

The abundance of natural gas liquids that have resulted from fraccing have resulted in low feedstock prices and major competitive advantages for U.S.-based petrochemical producers. Houston is home to a major share of the U.S. industry, with four of the largest eight ethylene complexes in the world located here, and it is about to be home to three more – two in Baytown and one in Freeport. Historically in the U.S., we have produced petrochemicals for the U.S. market and exported opportunistically. However, these new plants are being built for export to take advantage of low domestic feedstock prices. 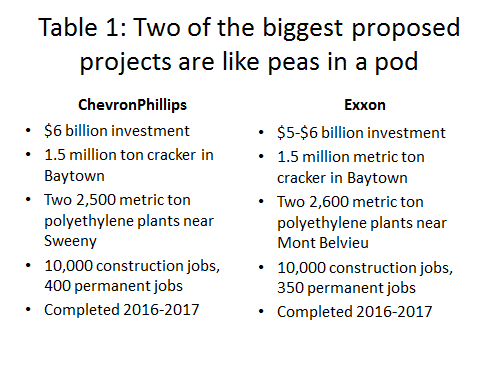 Table 1 compares two large and very similar projects proposed by ChevronPhillips and Exxon, each with a cost of about $6 billion. To put the cost and scale of these figures in perspective, a 30-story office building downtown might cost $250 million. These projects are each the equivalent of 20-24 such towers.

Horizontal drilling and fracturing has also produced large new supplies of natural gas for export. Six projects to liquefy natural gas and export it have now been approved by the Department of Energy, with three of them in the Beaumont-Lake Charles area, and one in Freeport. Each plant carries a price tag of about $10 billion and an expected completion date of 2018. A number of other potential plants remain in the permitting phase.

All of these projects are anxious to move forward. The large petrochemical projects, in particular, are now moving through permitting, procuring long lead-time equipment, and are anxious to be the first to market in 2016 to take advantage of what are currently very lucrative profit margins. Each plant is also concerned about craft availability and machine shop capacity, and does not want to be the last in line for these services in a crowded field. It is likely that these multi-billion dollar projects are finally playing a significant role in Houston’s construction activity, and now that the surge has begun, they will continue to play a major role into 2018.

It is a strange witch’s brew of events that have come together to propel Houston’s economy through the first four months of the year: a possible one-time producer relocation, a weather-driven push in drilling, some more predictable catch-up activity in construction and lot development, and likely acceleration in long-anticipated petrochemical construction. Based on its timing and the apparent early-year growth we have already seen, we need to reconsider our forecast for 2014.

Our initial take on 2014 was that the slowdown in upstream hiring was to stay with us through 2014, and that downstream construction would accelerate slowly through the year. We forecast 65,000 jobs, down from 76,000 in 2013. This was to be a transition year, as drilling and exploration handed off responsibility for the local expansion to petrochemical construction. Growth would accelerate again in 2015 driven by growing heavy industrial construction. Based on the twice-over but temporary shocks to the upstream, plus downstream building activity that is accelerating earlier than expected, we have increased the forecast by 21,000 jobs to 86,000. The revision is based on less solid fact than we would like to have, and considerable uncertainty about how these various factors will play out over the next 18 to 24 months. But it is explicit recognition that the Houston economy is now growing quite strongly.