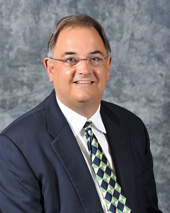 Dale Tibodeau, D.Eng., P.E., is a Professor of Practice of Supply Chain Management in the Department of Information and Decisions Sciences at the C. T. Bauer College of Business. He also serves as Director of the Bauer Supply Chain Forum, which oversees collaboration and engagement activities for students, faculty and industry partners. He was awarded his Doctor of Engineering degree from Southern Methodist University in Dallas (1994) is a registered Professional Engineer for the state of Texas and has also been awarded numerous supply chain related professional certifications.

Prior to joining Bauer in August 2012, Tibodeau was a Clinical Assistant Professor at Texas A&M University's Mays Business School (2010-2011) and Director of Industry Relations for the Industrial and Systems Engineering Department (2011-2012). He has also served as an industry mentor for graduating students an industry college recruiter and as an Invention to Product (I2P) panel judge for developing college technology entrepreneurs. Tibodeau was honored to serve as a guest lecturer and a featured speaker at various Texas A&M University venues (2006-2010) at University of Florida (1990) and at numerous safety seminars (2000-present).

Outside of his professional career in academia, Tibodeau is President, Chief Pilot and Chief Flight Instructor of Texas Air Adventures, a privately owned aviation services company founded in 2002.