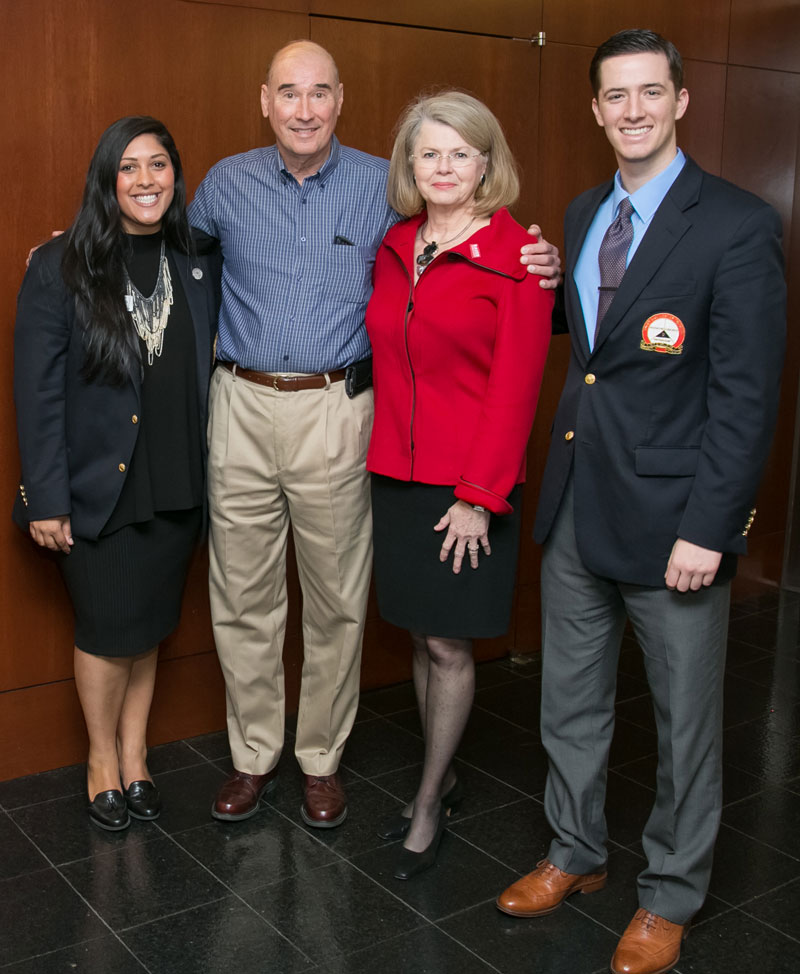 “This gift exemplifies the strong support of Bauer College students by the business community,” Dean Latha Ramchand said. “Andy and Barbara have been engaged with our sales program for several years now, and with their gift, we will be able to provide even more experiential opportunities for sales students at Bauer to elevate their skills to a professional level.”

“We are very grateful to the Gessners for this extraordinary gift,” University of Houston Vice President and UH System Vice Chancellor for University Advancement Eloise Stuhr said. “Their philanthropy will help generations of Bauer students, and no doubt inspire many other donors to follow Andy and Barbara Gessner’s lead.”

The Top Salesperson Awards will recognize both individual and team student success, and the Sales Competition Team Endowment ensures ongoing and regular learning opportunities backed up by the rigorous research and planning that precedes the challenging sales competitions.

Students in the Program for Excellence in Selling have a history of winning and performing well at the national level. Since the program launched in 1996, students have brought home wins in the National Collegiate Sales Competition, State Farm Sales Competition and other national and local sales competitions.

The Program for Excellence in Selling operates within the Stephen Stagner Sales Excellence Institute at Bauer College. This program, designed to give students real sales experience, includes more than 185 hours of live sales training within five courses. Admission into the program is selective and competitive, with an average of 75 students accepted each semester.

“Because of the generosity of Andy and Barbara’s gift to the Program for Excellence in Selling, our students will have the opportunity to compete in additional sales competitions across the country,” PES Executive Director Randy Webb said. “In addition to their endowment, they are also funding awards for students who are the top sellers in their respective sales classes. These awards reward those students who excel in selling each semester. We are very grateful to the Gessners for making such a huge difference in the lives of our students.”

"WE ARE VERY GRATEFUL TO THE GESSNERS FOR MAKING SUCH A HUGE DIFFERENCE IN THE LIVES OF OUR STUDENTS."

Both Barbara and Andy Gessner attended UH in the 1960s, with Andy earning a BBA from what was then known as the College of Business Administration. He credits his experience as a UH business student with his success in business management and sales, and he now lives by the creed that “nothing happens until someone sells something.”

“All commerce is built around sales,” he said. “We hope these gifts will allow and motivate students to appreciate and aspire to become top sales professionals and, by extension, to be the base of all commerce.”

The Gessners added: “We hope we are ‘paying it forward.’ It is our desire that some of the students helped by this gift will eventually support the University of Houston, thus ensuring the great university of Dr. Renu Khator’s vision.”

Gessner, a native Houstonian with a street named after his family, and a professed “peddler,” joined Industrial Air Tool (IAT) in 1979. IAT was founded in 1966 to repair pneumatic tools for the oil and chemical industries. Today, IAT is an industrial distributor carrying over 20,000 different items in inventory and representing 700 manufacturers’ products. Gessner has actively managed the company through many industry cycles and through various equity partners. He has been involved with buying and selling the company several times.

Barbara, originally from Ohio, is a graduate of Texas Woman’s University. While raising their daughter, Barbara was an active school and community volunteer and supported Andy in his career. They are the proud grandparents of two grandchildren.