The Gift of Sales 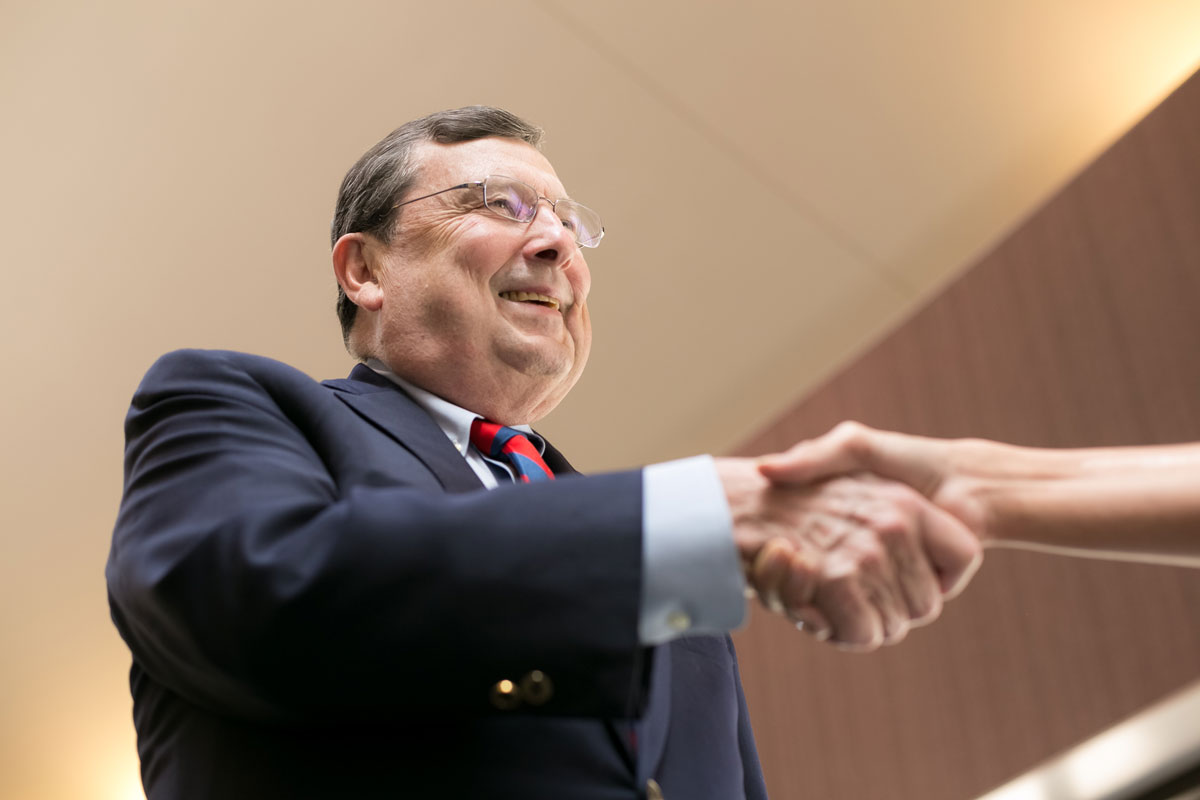 "My heart's with my undergraduate sales students. They keep me young. The EMBA students keep me challenged. You can't beat that combination," says Bauer Executive Professor Randy Webb.

West Virginia-born and Florida-raised, Randy Webb came to Houston in 1991 as president of Uncle Ben's Inc. By then, the Florida State University graduate had already made history at the Dial Corporation (where at 29 he became the youngest corporate officer on record) and served as vice president of sales for M&M/Mars.

Despite a sweet career that allowed him to travel the world selling M&Ms and introducing Uncle Ben's first microwaveable rice pouch, Webb knew he wanted to teach.

"It is about relationships. It's not any different from selling Snickers or M&Ms."

So just as he decided to take early retirement from Uncle Ben's, he started his Executive MBA studies at Bauer College and was hired as an executive professor in the college's newly established Program for Excellence in Selling. This was 1999.

Today, as the program celebrates its 20th anniversary, Webb is executive director of the Stephen Stagner Sales Excellence Institute, which was renamed in late 2015 after a gift from the former Mattress Firm CEO, which he helped cultivate.

We recently spoke to Webb — who lives in Houston with Judy, his wife of 46 years, and enjoys teaching Sunday school and watching old Western flicks — about his fascinating career, his time at Bauer and his role in the recent gifts to the college, including a donation from Houston philanthropists Andy and Barbara Gessner, who created an endowment for the college's sales competition teams and a scholarship program for top students.

After college, did you go straight to Dial?

Yes, I was recruited off the college campus. I had three offers. When I was going through school, I worked at a grocery store called Publix for about four years. I used to see these people coming in the store, talking to the store manager, stocking shelves. So I would stop and talk to them. I decided when I graduated I sure didn't want to get into the retail business. You had to work too hard. I started interviewing for companies to go into sales. Dial actually had the best training program, and I felt like had the most opportunity. Even though that was the least amount of money I was offered, it turned out to be a good decision.

You spent 15 years at Dial and ended up as Vice President of Field Sales. Why did you leave?

I wanted to work for a global company. I had the opportunity to work for Mars, which is truly global.

And from there, you had other goals.

When I talked to Mars about taking the job, I said, "If I go up there and do a good job, will you give me a shot at running one of your companies?" And they said, "You got a deal." At that point, no one out of sales had ever been appointed a president of one of their companies. We did well at the candy business, so they lived up to their end of the bargain, and I went to Uncle Ben's as president.

After such success, why did you pursue an MBA?

I ended up taking early retirement, because of health reasons. I had always had a desire to teach. I always said I wanted to be in a position to be able to do that when I stopped my business career. And so the reason I went back and got my MBA was because I wanted to teach at that level, and I felt like to be credible I had to have the degree I was teaching. That was my motivation to go back to school.

Do you think Bauer's sales program was ahead of the curve nationally when it started 20 years ago?

Yes, there really weren't a lot of sales programs. There are now a number of schools that have sales classes, but not as a major, minor or as a degree. We have marketing Ph.D. students who focus on selling. I think we are at the only university in the country that actually has a Ph.D. program focused on sales. And when those people graduate, they go to other universities either to enhance their program or start a new one, which is cool to see.

How did the Stagner gift come about?

One of our former associate deans for development had a saying, "Involvement leads to investment." So we got Steve (Stagner) involved with our sales program. In a nutshell, the reason he invested was because of our students and the difference they have made in his company. He also wants to elevate sales as a profession. They have hired quite a few of our students, and they have done extremely well at Mattress Firm.

And what about the Gessners?

This story originally appeared in Volume 3, Number 2 of Inside Bauer magazine.