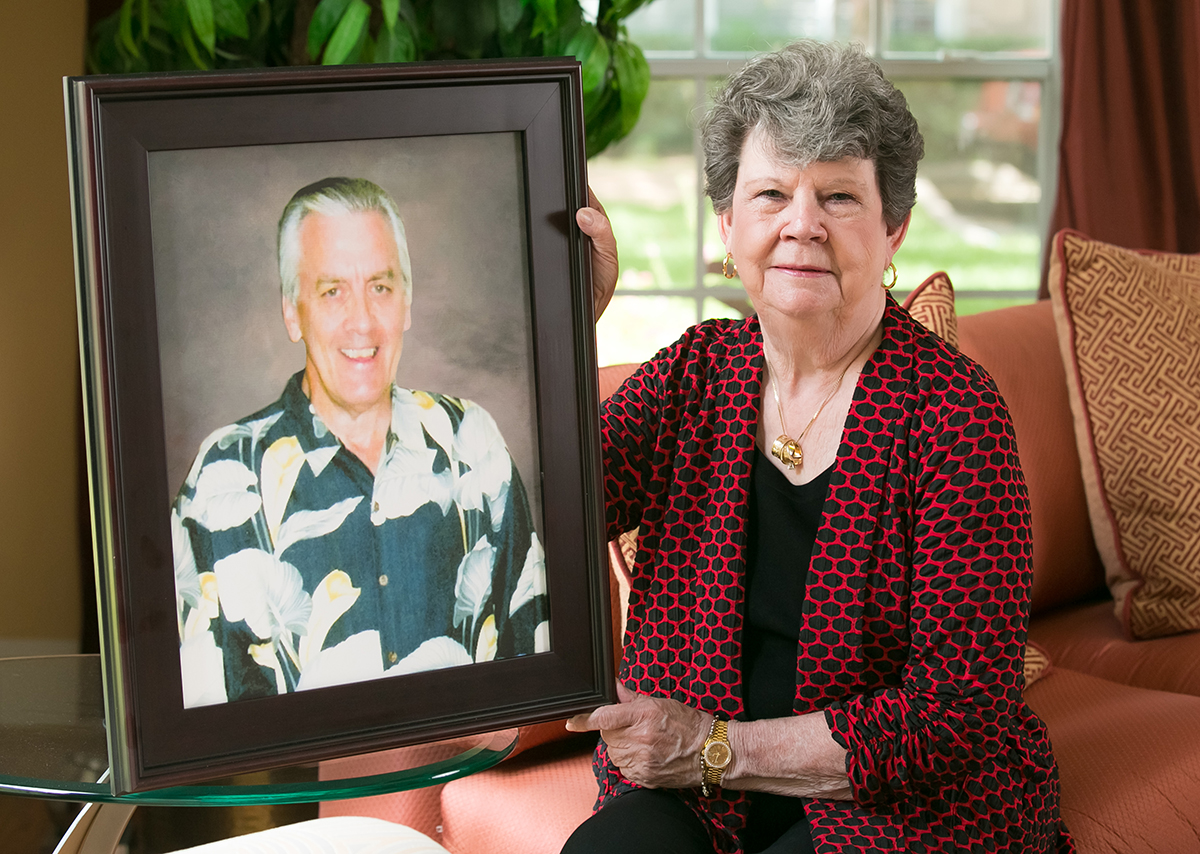 Judy Stover, and her late husband Jim Stover (BBA ’72), created the Judy and Jim Stover Bauer Excellence Scholarship Endowment in 2012 to give back to the university that gave so much to them.

Jim Stover (BBA ’72) didn’t start college until he was 24. But once he got to the University of Houston, he seemed to be on a path to make up for lost time. When his hard work paid off and he got a good job, as an auditor for a top accounting firm, the first thing he did was write a check to his alma mater.

Stover, who enjoyed a successful career as a business executive and gave generously to Bauer College throughout his career, died July 4 after a long battle with Parkinson’s disease. He was 74.

The UH Alumni Association honored Stover by flying its flag at half-staff during the weekend of his memorial services.

“Jim was a loyal Coog who made UH a part of his life and legacy forever,” said Bob King, Bauer’s Senior Director of Advancement. “He and his wife, Judy, are wonderful examples of gratitude in action.”

Harold James Stover was born in Montevideo, Minn., in 1943. His family moved to South Dakota when he was 4. “Jim was what you would call a late bloomer,” Judy recalled. “He almost didn’t graduate from high school because his grades were so bad.”

After serving in the Navy, Jim returned home to South Dakota and, according to Judy, dug ditches for about a year. He studied accounting at a community college, and later worked as a bookkeeper at the State Library in Pierre, where he was the youngest person on staff.

We just happened to be at the right place at the right time. That’s why we feel very indebted to the University of Houston, because the university has been very good to both of us, and we just feel like we needed to give back.

“The oldest was like 92, all women,” Judy said wryly. One day he came home from work and told her: “I’ve got to do something better than this. I want to get my degree in accounting.”

UH was among the first schools to accept Stover. Because he had lived on the East and the West coasts during his time in the military, he decided to give the South a try. Judy had committed to being the family breadwinner, and they thought the job market would be better in Houston.

In 2012, they created the Judy and Jim Stover Bauer Excellence Scholarship Endowment as a way to support an institution they say gave so much to them.

In recent years, they accelerated their investment in Bauer by taking advantage of the IRA Charitable Rollover, which allows taxpayers 70½ and older to transfer up to $100,000 annually from an IRA account directly to charity without having to recognize the distribution as income.

At the time of Jim’s death, Judy estimated that she and her husband had donated funds in the six figures to the endowment to assist Bauer students.

For Jim, the scholarship had deep resonance: After enrolling at UH, his good grades helped him qualify for scholarships. This allowed the young couple to pay the bills and start a nest egg. At the same time, Judy found work on campus, as an administrative assistant for the dean of the College of Engineering.

“We just happened to be at the right place at the right time,” Judy said in an interview shortly before her husband’s death. “That’s why we feel very indebted to the University of Houston, because the university has been very good to both of us, and we just feel like we needed to give back.”

Stover, who started his career as an auditor with Haskins & Sells (now Deloitte Touche), retired in 2009 from Price-Gregory, a natural-gas pipeline contractor.

Around that time, he was diagnosed with Parkinson’s disease.

“His concentration was diminishing,” Judy says. “He didn’t like going to work. He became confused and felt like he wasn’t doing his job.”

After he retired, the Stovers got to do some traveling, including a trip to Africa in 2012, but Jim was homebound in his final years. Judy remained a tireless caregiver, and she was deeply proud of her husband’s success, and his generosity. The Stovers would have been married 51 years in August. They had no children.

“Jim and Judy are two of the greatest people you could ever meet,” King said. “The love and care they showed for each other is inspiring, and the support they have provided through their scholarship has been invaluable to Bauer students.”

“He always donated money to the university,” Judy said of her husband. “Whether it was to the College of Business, the athletic department or the alumni association, he would always write a check at the end of the year. It wasn’t much back then — $500 or $1,000, but he started giving from the day he graduated.

“He just said: ‘We did very well because the University of Houston was very good to us. We just need to give back.’”