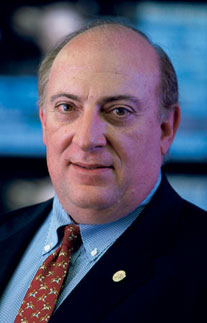 About three years ago, Mike Cemo wanted to know how several recent hires — all freshly minted graduates of the University of Texas MBA program — knew so much about managing stock portfolios. As an executive vice president of AIM, one of the nation’s largest investment management companies, Cemo was curious how these MBAs had gained so much “real world” experience in the classroom. From his own career, spanning more than three decades in the mutual fund business, he knew the best way to learn how to manage a portfolio is to actually handle one. Cemo knew there is no substitute for hands-on experience.

A 1968 graduate of the University of Houston, Cemo soon learned that these newly hired MBAs had taken part in a program that gave them an opportunity to actually manage a stock portfolio while they were in school. “Being a Cougar,” says Cemo, “I thought, here we are the University of Houston, a premier institution in the fourth-largest city in the United States, serving one of the most vibrant business communities in America, and we don’t have a program like this. I wanted to know why.”

His desire to answer that question set in motion a string of events that not only spawned the creation of a $5.5 million student-managed mutual fund but also led to long-term funding for a number of new faculty positions and the creation of the University of Houston’s $5 million AIM Center for Investment Management.

Moreover, Cemo’s Cougar pride and “can do” attitude invigorated the UH business college faculty, provided critical mass for more local and national corporate donors, and helped open doors for a $40 million donation from Cemo’s former boss, Charles T. “Ted” Bauer, a man who believes that a public university in an urban setting should deliver exceptional business education at an affordable price.

“From the beginning, my focus has been to help the school build a center of excellence for training MBA's how to manage a stock portfolio,” says Cemo. “But in all fairness, everything that’s happened — the AIM Center for Investment Management and the Cougar Investment Fund — has been a work of love by a lot of different people and some very fine corporations.”

Indeed. Back in the summer of 1999, a number of unrelated events were about to unfold on a number of fronts. No one knew that these events would converge three years later into what would become the renaissance of a business school.

In the fall of 1999, UH Professor of Marketing Bette Stead was ready to submit her capital campaign proposal for the business college. Stead, a thirty-four-year veteran of the business college, knew it was time to act. To maintain the school’s position as a leader in business education, UH needed more instructors, better equipment, and improved facilities.

“Our faculty numbers were decreasing, but our enrollment was increasing,” says Stead, now retired. 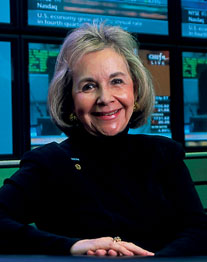 “It was time for us to grow.” Bette Stead, Retired Professor, Marketing, Bauer College of Business

“Our computer systems needed upgrading. And as one of the most utilized public facilities in the state, Melcher Hall — where the business college is housed — needed renovation.”

Stead’s proposal also called for hiring a professional development officer to lead the capital campaign to achieve these goals. She presented her plan to the dean, who set in motion the task of gathering facts and assessing needs.

A month before Stead began writing her proposal, Cemo started his quest to learn everything he could about the University of Texas’s investment center and student-run mutual fund. He traveled to Austin where he met the development officer for the business school, Bob Casey. Over a period of eight years, Casey had helped the business college land more than $100 million in cash and in-kind contributions. Casey attributed his success to running his development office like a business. He told Cemo that donors are attracted to what Casey called “centers of excellence,” organizational units focused on specific areas of study that apply directly to the business world.

“I then met with Jerry Strawser (then interim dean of UH’s business college, now dean of the business college of Texas A&M University) and Professors Ron Singer and Rich Pettit,” says Cemo, “and I said if I could raise the seed capital, would they dedicate the time and effort to help produce an investment center and student-managed fund for the school of business at UH?”

With that stamp of approval, Cemo approached AIM Management Group and a number of senior members of AIM. He argued that UH was an ideal spot for a student investment center. More than 400 AIM employees were graduates of UH, the largest contributing university to AIM’s staff. What’s good for the University of Houston College of Business Administration, he reasoned, is good for AIM. “With a center dedicated to training stock portfolio managers, AIM employees could get the benefit of a top-notch MBA program right here at home,” says Cemo.

With the help of Gensler architectural firm, it was estimated the business college needed $1.75 million to start building the investment center and an additional $3 million in in-kind donations from the business community to complete it. Seven executives from AIM helped raise $1.2 million as seed money. At the same time, Cemo began seeking investors for the creation of the limited-offering, student-managed fund called the Cougar Investment Fund.

During the spring of 2000, University of Texas’s Bob Casey began working with the UH business college to help administrators and faculty flesh out their capital campaign project. By April 2000, business college faculty had completed their “wish list” for the capital campaign, a list that had grown to $80 million. The needed endowment would be used to attract top faculty.

“When we were working on the AIM Center proposal,” says Cemo, “ it occurred to me that the University of Houston was an absolutely perfect fit for Ted Bauer. Mr. Bauer was the type of caring individual who had already demonstrated a desire to help make a difference in higher education. He especially wanted to do something here in Houston. I asked him if I could put him in touch with the university.” 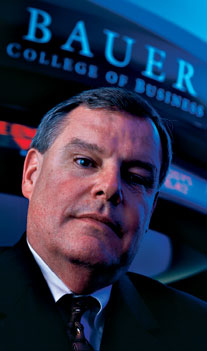 In May, Casey joined the UH business college staff as assistant dean of development. “I fell in love with the University of Houston and particularly the College of Business Administration,” says Casey. “Even though it has tremendous quality, I could see that the college was under appreciated and under funded. I saw the same opportunity here in Houston in 2000 that I had seen in 1992 at the University of Texas.”

On May 25, Casey, Cemo, Interim Dean Strawser, and top business college representatives met with Bauer. The presentation was designed to show Bauer why donating to the University of Houston business school would benefit AIM and the Houston business community. But Bauer needed little convincing. His background had already primed him to be receptive. At the end of World War II, he worked as a securities analyst on Wall Street by day. At night he attended business school at New York University. He understood what it meant for working professionals to take classes after hours.

Two weeks later, Casey and key business school administrators began preparing for yet another meeting, this time with potential corporate donors for the AIM Center. Shortly before that meeting, Cemo remarked to Casey and others, “You have got to get in front of Ted Bauer. You made such an impression on him that he wants to meet with you before he leaves town for the rest of the summer.”

After months of work — planning a campaign, setting up budgets, making calls, raising seed money, following leads — it seemed everything had come down to two presentations: one to potential AIM Center sponsors, another to Ted Bauer.

At a luncheon forum on July 10, Cemo and company made their AIM Center pitch to potential partners. This and other meetings led to an impressive lineup of in-kind donations from the likes of Cisco, IBM, Reuters, Avaya, and NASDAQ. Local firms like Houston-based McCoy and Steelcase, a leader in furnishings, provided furniture and carpet. Fulbright & Jaworski provided legal counsel. Road Show Media provided streaming video for the AIM Center Web site.

In the AIM corporate offices on July 12, Bauer met for a second time with UH representatives. Casey and the team for this project had prepared three proposals, one for $10 million, another for $20 million, and a third for $40 million.

“As we came down the hall, we could see Ted pacing back and forth, waiting for us,” says Casey. “He’s very punctual and decisive. He invites us in, and he tells us that his CPA will join us. He pulls out our original proposal. It’s dog-eared with yellow sticky notes all over it. I have studied your document,’ he said. ‘I like it. You need $80 million. I want to give you half of it. You have to get the other half.’” Bauer, it turned out, had been thinking about a major gift since 1999.

Everyone hugged. Ted Bauer had just adopted the business college at the University of Houston. The rest, as they say, is history. A thrill swept through the college, followed by a number of significant events:

“If this process continues,” says Casey, “in ten years we will have seeded the marketplace with caring and committed alumni. Our future is in the individual who is inspired to give back. The Bauer College of Business is an exciting place to be.”

And Mike Cemo — by the way — was appointed to the UH System Board of Regents by Governor Rick Perry.