Waste Not, Want Not

Entrepreneurship Mentor Believes in Giving Back 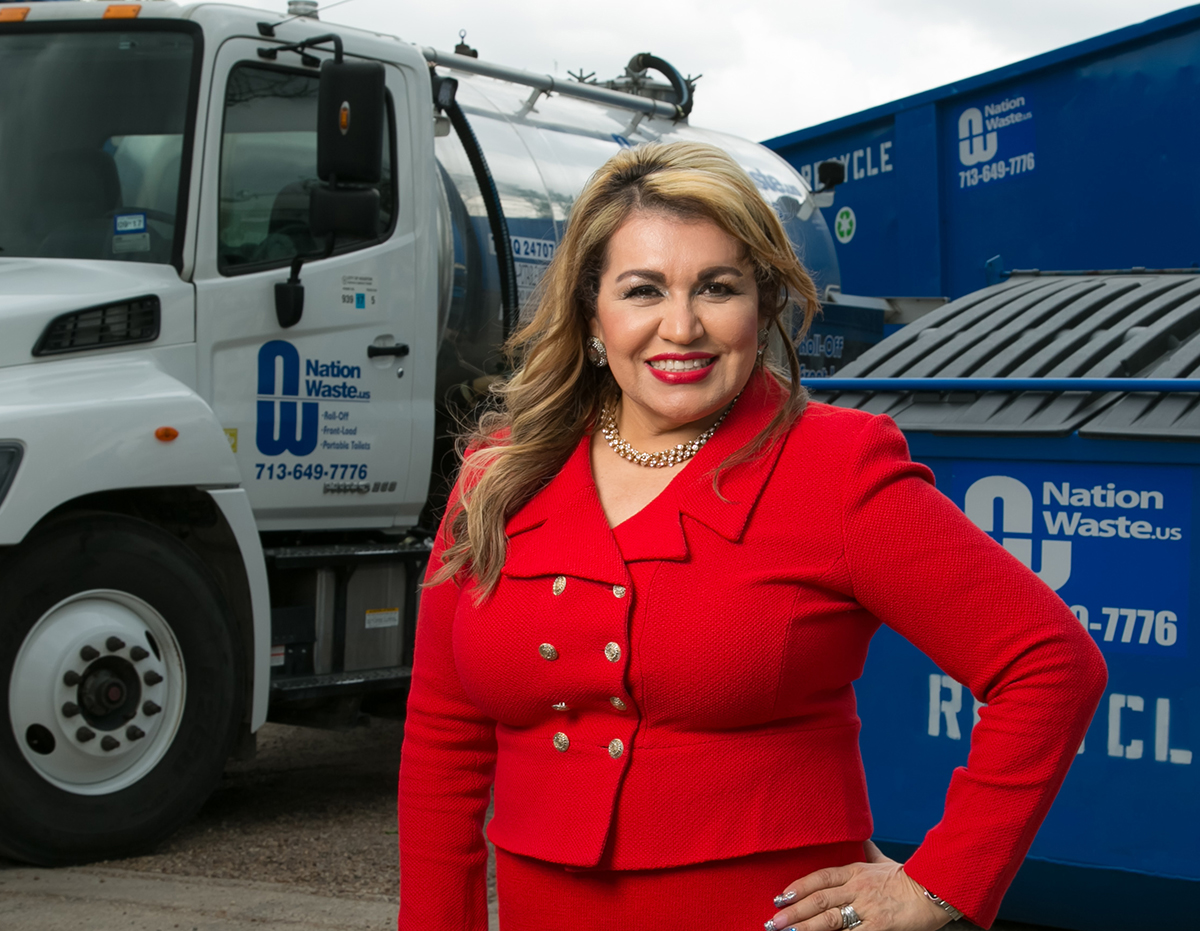 “A STRONG LEADER MUST BE NIMBLE, READY TO ADAPT … ESPECIALLY IN MY INDUSTRY, WHICH IS BEING TRANSFORMED BY TECHNOLOGY AND INNOVATION,” SAYS MARIA RIOS, PRESIDENT AND CEO OF NATION WASTE INC., THE $30 MILLION WASTE MANAGEMENT, RECYCLING AND PORTABLE-TOILET COMPANY SHE FOUNDED 20 YEARS AGO.

When Maria Rios was 13, her parents told her to pack her bags — they were going on vacation. They didn’t tell her they were leaving home for good. As citizens of El Salvador, they fled the civil war that was ripping their country apart.

That’s how a young Rios found herself in Houston in 1980, far from the ranch where her daddy had grown cotton and sesame seeds, watermelons and corn. She remembers going to work with her mother, who found a job cleaning high-rise office buildings in the strange new city.

Today, Rios — who married young, had three children and put herself through college — is the epitome of the American dream. And as a successful immigrant, American citizen and entrepreneur, she believes she has a “moral obligation” to give back to society, including the role of mentor for a Class of 2016 student in the Cyvia and Melvyn Wolff Center for Entrepreneurship at Bauer College.

Twenty years ago, using a business plan made while finishing her studies at the University of Houston, Rios founded Nation Waste Inc., the first Latina-owned waste-removal company in the United States.

Today, the company that started with a staff of three has 48 employees and a satellite office in Austin. Over time, it has expanded its services to include portable toilets as well as waste removal and recycling.

In 2013, Fortune named Rios one of the 10 Most Powerful Women Entrepreneurs in America. More recently, CNBC featured her as a “Blue Collar Millionaire,” praising her as a hard-working, self-made executive who built a $30 million empire from trash. And just this year, Rios landed the contract to provide portable restrooms for Super Bowl LI in Houston, a fact that causes the humble president and CEO of Nation Waste Inc. to beam with pride.

“I’m not only servicing small-business owners in Houston and Austin,” she says excitedly. “But also I’m able to be in the competition with these bigger players and get a contract from the NFL. I mean, that’s my dream!”

While she was working her way through school (first at Houston Community College, later at UH), Rios took a job answering the telephones at Western Waste, where her proficiency in Spanish proved to be a great asset. Working her way up the ladder, she saw unfulfilled opportunities for minorities in the waste industry.

“That’s when I started applying every single thing I learned at UH.” (As a transfer student with many general arts and science credits, she earned a BA in 1997, though she took business courses at UH.)

“I always knew I wanted to have my own business,” Rios says. “I wanted to have something that is going to be a necessity, that is not going to go away and that will always require innovation. And so I thought: ‘This is what I want to do.’”

There’ll always be waste, after all. Why not make money off of it?

No surprise that Rios encountered some resistance in the male-dominated field. Sometimes she’d arrive at meetings, only to see contracts that had been made out to “Mario Rios.” Never mind that “Mario” was wearing lipstick and high heels, she laughs.

She tried to respond with grace and dignity, to keep moving forward and not make an issue out of it. “I never stopped to think about gender,” she says. “I just thought about the business opportunity. … What I did was to follow my dreams and to strive. Happily, I did it right.”

Now, as a business leader, she believes she has a duty to give back to those less fortunate. It’s something she learned as a child born into privilege and comfort who had to start over in a new world. “It’s not all about having a business mind,” she says. “It’s about having a servant’s heart.”

One experience that has given her great pleasure is mentoring with the Wolff Center for Entrepreneurship. In particular, she was blown away by her mentee Desiree Worrell-Mosley, who owns a child-care business. “She is flourishing,” Rios says of her mentee. “I love to surround myself with people like her.”

As an immigrant who faced challenges along the way, she has some words of encouragement for people in a similar situation today.

“Stay faithful and keep learning. Knowledge is power. … I’m living proof of a dream that is purely American.”