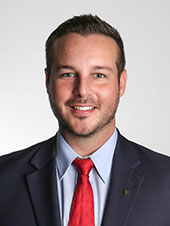 Austin holds a Bachelors of Science degree in Kinesiology and a Business Foundations Certification from the University of Texas at Austin.